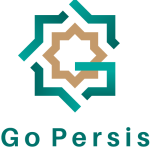 Shah Mosque Is A Majesty of Art

Shah Mosque, The greenish-blue Jewel of Isfahan which will attract your eyes from each side of Naqsh-e Jahan Square.

Imagine a vast plane with turquoise jams scattered all around the place, among which one seems dazzlingly shiny. Isfahan is best known for the turquoise domes of Safavid mosques and Naghsh-e Jahan Square. Isfahan is known as the City of Turquoise Domes of Safavid mosques, two of which are located at the Naqsh-e Jahan Square. The prominence of the Shah mosque is so dazzling, which will attract your eyes from each side of Naqsh-e Jahan Square. The changes that have taken place in the naming of the monument indicate the fundamental role of the mosque. 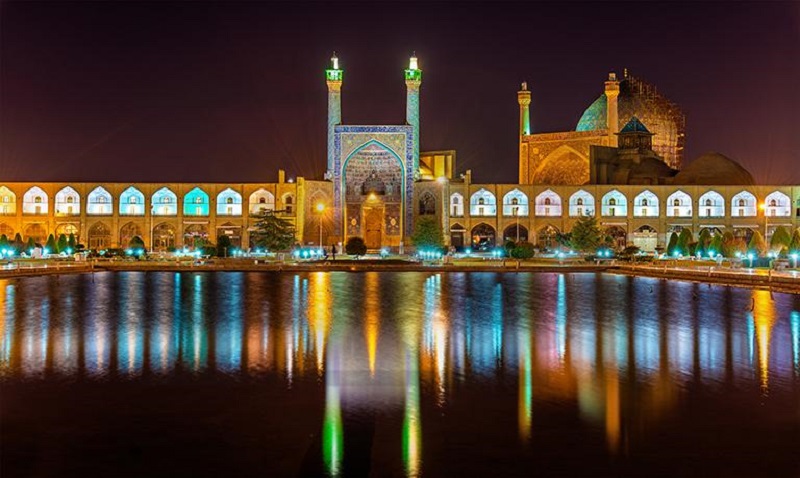 It was 1020 AH, the twenty-fourth year of the region of Shah Abbas I, when he ordered to build the Shah Mosque, which took over 50 years to complete the structure and the decorations. According to historical documents and in the inscription on the mosque entrance created by Alireza Abbasi, the famous calligrapher of the Safavid era, it is mentioned that Shah Abbas I dedicated this mosque to the spirit of his ancestor Shah Tahmasb. The delightful design of the Shah Mosque is beyond the scope of discussion; The entrance and the two garlands are the dazzling parts of the mosque that would catch your eyes as you cross through the hall of Bazaar. Soon you’ll be dazzled by the unique Muqarnas, and mosaic tiles worked all around the entrance door.

One notable thing about the entrance is that they built the entry before the formation of the Naghsh-e Jahan Square was complete so, they stopped the construction until the Naqsh-e Jahan Square structure was complete. This massive door is designed with eight verses of poetry written by the poet Behna Wahb. This gate is hidden behind another door that was built during the reign of Reza Shah Pahlavi to protect the mosque. One thing to know about the construction is that it was ideal for the builder to make the door with strong, firm material so, they made the door of sycamore wood, which repels insects such as termites due to its bitterness. During the reign of the Safavid King, the mosque was designed with silver sheets and gold water. 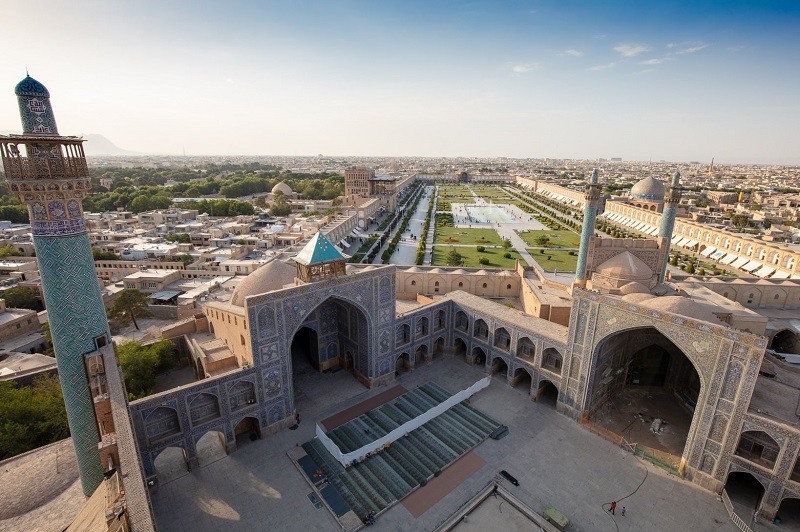 Since the mosque was built by the order of the Safavid King, Shah Abbas I, it is named the Shah Mosque. But after the 1979 revolution of Persia, its name was changed to Imam Mosque. 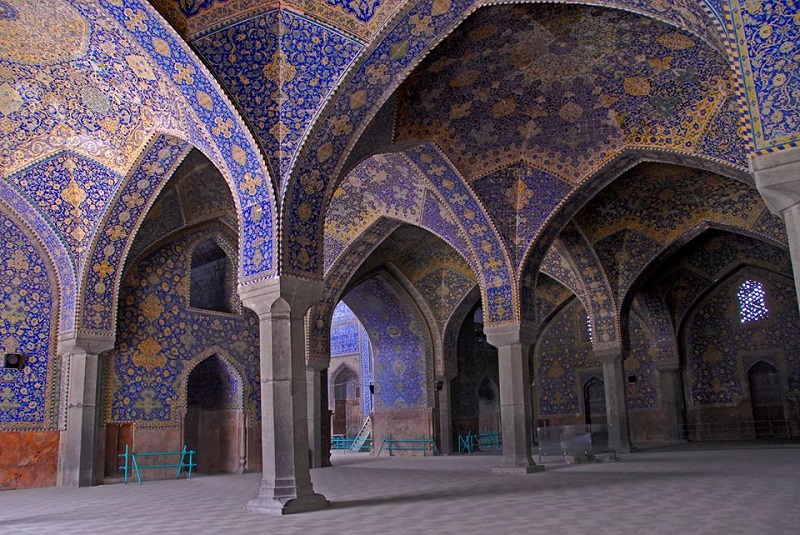 What is prevalent in the architecture of Islamic monuments is to build them in line with the qibla but, the Imam Mosque is not created based on the same rule. (The entrance was developed in such a way to fit the main structures of Naghsh-e Jahan Square) instead, the architect of the monument, Master Ali Akbar Esfahani, did a genius work! He designed the rest of the elements based on the same rule and connected these sections with two narrow corridors. These corridors changed the angle of the body of the mosque by 45 degrees. As you look up at the roof of the entrance, you’ll be enchanted by the delight of the azure tile works. If you cross through the western corridor, you’ll face an inscription on which, the order of Shah Abbas I, to forgive the taxes of a few classes.

Isfahan Imam Mosque is a type of four porches. As you pass the entrance, the tranquility of the north porch makes you forget the hustle and bustle of the Naqshe Jahan Square behind you. The eye-catching thing about the entrance is the figures of the two green peacocks facing each other, like the phoenix – which is reminiscent of the symbol of “eternity” in Persian culture. Along with these, you will see figures of birds and flowers evoking paradise. There you can see the words Allah, Muhammad, and Ali written in Kufic script.

This mosque is designed in such a way that you would feel free to wander all around the place” You won’t even have to cross any stare to get to the various parts of the mosque, which shows equality between human beings was cared to have access to all areas. The eye-catching feature about this part is that where ever we turn our head is the illustration of nature and birds, the detail of which are drawn using gold and silver that will dazzle you for hours. The path to get to the alter is like a tunnel through nature; The roof is held up by the strong pillars, like the blue sky, and the designs on the walls are the embodiment of nature.

From the eastern corridor of this porch, there is a way to the Abrizgah. We will get to the dome and the altar on the south porch. The height of the inner minarets is about 48 meters, as the height of the entrance minarets in Naghsh-e Jahan Square is 42 meters. It should be mentioned that the dome includes two-skins. The inner and outer layers are 52 and 38 meters high, respectively. The space between these two domes is filled with wooden scaffolding. The two east and west naves that lead to the altar and the dome include crescent-shaped arches, kept like crowns on the pillars. In this place, on one side of the altar, the marble pulpit catches your eyes when you turn your head.

If we take a general look around the Imam (Shah) Mosque, we notice how gentle the seven-colored clay tiles are worked all around the place, with the difference that blue is the dominant color in the whole building. But the glowing yellow color used in the naves records the illusion of the Shah Mosque as warm and shining as the sunlight. On the southern parts of the mosque, the two olden schools of Nasiri and Sulaimaniyah are located. They were repaired by Nasser al-Din Shah and Shah Suleiman, respectively. 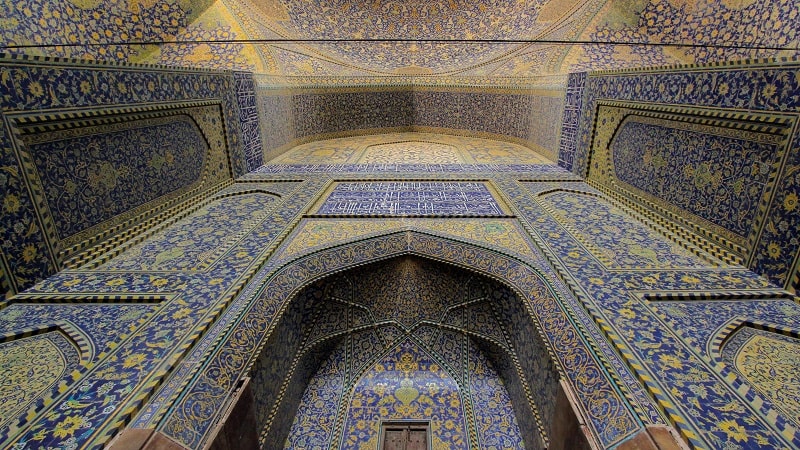 The Seven Sangab on Imam Mosque

Sangabs (Troughs) are large vessels made of stone located in different parts of the mosque used to contain water for the prayers use. Thus, in some ceremonies, they were filled with syrup.There was a place for drinking bowls at the edge of the Sangab. The troughs of the Imam (Shah) Mosque are made of iron ore, marble, and jade, and some of them have inscriptions and years of construction.

Here, under the Shah or Imam Mosque’s arch, thousands of voices have made their way into history; there were days that someone with a mellifluent voice sang a song of gloom, sometimes pleased mates raised their laughter, somedays only whispers were there, and once in a while there were men who hit the history. Like sound, we wander among the ceiling’ flowers, and our reflection goes down in history. Standing below the central point of the main dome, you can test the reflection of your voice in a radius of about forty meters, which is of course one of the most fascinating experiences of visiting the Emam Mosque. This sound reflection is attributed as a feature of the dome’s structure, which allowed the muezzins to make their voice heard without a loudspeaker, to all worshipers throughout the courtyard.

Sometimes to show this feature by standing on the marked stone, some would test the sound reflection by tapping on the ground and clapping, however now tapping the foot is obsolete. In the meantime, sometimes a person having a euphonious voice would sing a song or say adhan which conveys a pleasant resonance to the audience in prayer halls. Now, if you have no idea what the adhan is, then still accompany us so that we can acquaint you with it. 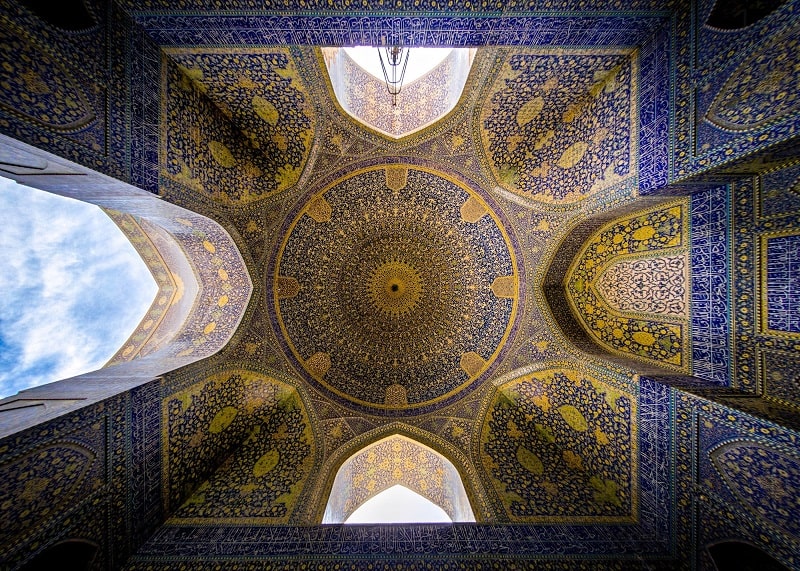 Religious music is a noticeable section of the treasures of Persia’s spiritual heritage  and Persian musical traditions, which are passed from one generation to the next. Its types include prayers, adhan, supplications, lamentations, and so on. Adhan is the most enduring religious melody among the collection of ritual and worship music of Persians. It is also one of the common rites of Muslims all year round, lexically means “informing” and “spreading the message” which in Islam is a call to announce the time to pray with specific words. According to Muslims, adhan, as a heavenly and religious call, is an invitation to pray, strengthening the inner relationship with God. During adhan, the muezzins usually stand in a high place, putting his hands on ears, and says adhan’s sentences loudly.

With the advent of Islam, the folk music of different zones served Islamic rites and rituals. In a short time, distinctive tones for reciting the Qur’an and adhan emerged in every nation and region, which today is known as a valuable treasure of Persian national and spiritual resources . About 40 tones’ types for reciting the Qur’an and adhan have been identified in Persia that all of which have originated from the inhabitant’s lifestyle, although some of them are in danger of being forgotten nowadays.

From a musical point of view, adhan can be defined as the Islamic world’s sound indication as it informs all like-minded characters to perform prayers and show the unity of action. It is interesting to know that there was not any tradition to recite with a pleasant and musical tone in Islam; this tradition originated from countries such as Persia, and to some extent Egypt. The recitation of adhan and the Qur’an originated in these countries in a graceful tone, just as architecture and calligraphy spread from Persia to other Islamic countries. Many Arabic Quranic and musical authorities still have Persian titles, and Arabic music owes much to Persian music.

Most of the Persian muadens had recited adhan in the Bayat-e Turk Avaz, in Ruh al-Arwah Gusheh as well as Shur, Shahnaz, Hejaz, and Abu Atta. Many Persian singers have also been muadens. Saying adhan with the tone of Persian music has been performed by some Persian singers in the past, such as the Abolhassan Damavandi’s, one of the late Qajar and early Pahlavi singers. His adhan, which is at Bayat-e Turk’s interval, is the first adhan recorded sample, on a gramophone, in 1308. Along with all adhans, the most prominent and lasting Persian adhan belongs to Rahim Moazenzadeh Ardabili that is sung in Ruh al-Arwah Gusheh and Bayat-e Turk Avaz. The combination of the Bayat-e Turk’ Dastgah atmosphere with his voice had led to the permanence of this adhan as the first of four unique events in the religious music of Persia.

Mohammad Reza Shajarian, the master of Persian singing who had undeniable expertise and abilities in reciting the Qur’an and prayers, considered mentioned adhan of Moazenzadeh Ardabili to be immortal among history. According to Shajarian, he summed up the massive Bayat-e Turk Dastgah in 5 minutes. 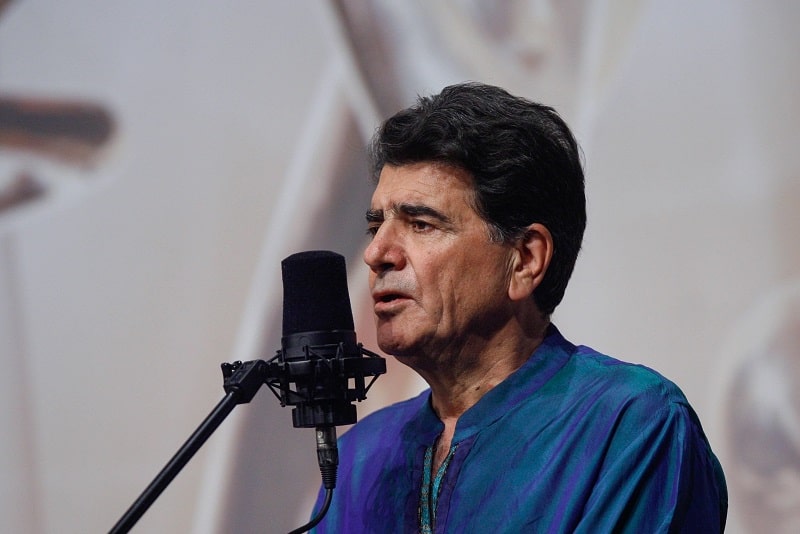 GoPersis DMC. maintains a longtime affiliation with international organisations and association as a tour and travel company in Iran. GoPersis team releases articles about Iran and Persia in UNESCO and Observatory Patrimoine d’Orient as a reference. Our services such as Iran hotels, flights and tour booking platform cause tourists satisfaction and partners trust.

© All Rights Reserved for GoPersis DMC.